I don’t eat red meat. But I sure do love me some Cheeseburger. So when I got word that the boys from Brooklyn were coming to town on the Tales of Colt 45 tour, I decided I’d definitely brave the tidal wave of douchebaggery to see some great cock rock.

Now, it’s hard to get me out to shows these days. Especially when a simple gig is overloaded with distractions meant to pull scenesters in. Professional studio photography, ice cream trucks, do it yourself silk screening, grafitti artists…free crack…if the music was actually good, would the clubs need all this excess shit to lure in the jaded Hollywannabes? Or is the pure love of music an outdated quality?

Colt 45 and Vice magazine were banking on the former with this night. one of the many ‘lifestyle’ extravaganzas which litters the LA scene these days. King King was packed when I arrived, and people were swaying, yelling, spitting and fighting. The free 40 ouncers were like the proverbial stick rattling the tiger cage at the zoo. The only thing left to light this powder keg would be a set of searing party rock.

The first thing I asked when I found the band in the crazed crowd, was if their guitarist had been tested. Last time they played in LA, Eric bled all over the stage at an alarming rate. I don’t begrudge an axe man with diseases, but I just had to be sure. 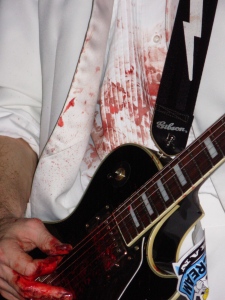 The band assured me that while he may be disease riddled, the calluses he built up would prevent him from bleeding on me during the show. So that takes care of me during the show…I didn’t go into what would protect me afterwards.

Joe, Luke, Eric and Christy, shuffled single file into their “green room” and closed the door so we could get some quiet. Closing the door seemed to make it louder in their actually, the door being less like a piece of paper and more like a noise sponge.

None of them were thrilled to be interviewed, even by an old friend, except for Christy who began snapping pictures and video of me to commemorate the precious moment.

AOTA: What’s the matter? We had fun on Little Radio last year.

JOE: Yeah but we were drunk. You gave us a keg of Heinken.

AOTA: Yes, true. We did roll out a party for you. But you have free Colt 45 – the sponsor of your mini tour. And I’m sure Vice would spring for a few drinks too.

JOE: I actually hate both of those products. I find them distasteful.

Joe scowled and took a swing off a Bud light. Christy stopped taking my picture long enough to survey the energy in the club.

CHRISTY: I feel hostility. I don’t know what it is, but it seems very hostile in this place.

AOTA: You’re in Los Angeles. And you’re in a room of people liquored up on Colt 45 which is slightly less like crack than Sparks, but not by much. But rumor has it that it’s been used as a form of chlorofyl in several kidnappings…

JOE: Colt 45 is for homeless people and college students.

Another long swig of Bud light.

AOTA: What do you have against the homeless? And didn’t you like college?

CHRISTY: College is supposed to be the best time of your life.

AOTA: Was it yours?

CHRISTY: No. I was depressed and lonely in college.

Christy lamented. Pause. Christy snapped another picture. I put my hand up to keep from being blinded by his flash.

AOTA: So when did that change?

CHRISTY: When I got successful and joined Cheeseburger!

Christy yelled this with a passion I haven’t seen from anyone on either of the coasts for a long time.
And I believed him. If you were in a band like Cheeseburger, whose main raison d’etre was to goad people into partying their asses off, wouldn’t you consider it a Cheeseburger job, well done?

Seeing as the guys have had triumph in placement lately, I asked how they felt being featured in Grand Theft Auto IV.

AOTA: Nothing like hearing the song “Cocaine” while you beat the crap out of someone you drag out of their car, yeah?

JOE: I’ve never seen it or played it. I don’t like playing games.

AOTA: You never played a video game? Even when you were a kid?

Christy added this fact with an air guitar riff played on his beer bottle.

JOE: Cheeseburger is against violence. Enough is enough!

CHRISTY: Yeah! How much quote, violent bullshit, unquote, will we put up with? Make sure you put that part in quotes. And then tell them to ‘Google that’!

Not wanting my article to be a platform for their subversive propaganda, I quickly changed the subject.

AOTA: So, you guys have a song placed in the Will Ferrell movie, Stepbrothers.

I was met with half assed nods and grumbles.

AOTA: Did you see it?

A chorus of no, until Eric sheepishly nodded.

The others jeered at him. I think I heard a “duh” form somewhere in the room.

AOTA: Sooo, you don’t drink Colt 45 or read Vice. You don’t play Grand Theft Auto and most of you, except the bleeder over here, wont go see the movie your music is in…so I guess my question is, with all these sponsors that you will work with or take money from – is there anyone you won’t work with?

CHRISTY: I’ll work with anyone.

Joe shook his head disgusted and stood up and walked away from us.

CHRISTY: Make sure you write that he left the interview at this point.

CHRISTY: I heard about this guy in Europe who opened an orphanage for toy baby dolls. You have to go through adoption interviews and everything. But it’s for a doll.

AOTA: For a doll? Who would do that?

AOTA: Is this something Brad and Angie are contemplating? Have we run out of real children? Is this the only choice left if I wanted to get a baby?

CHRISTY: You could go fuck a homeless guy.

AOTA: Oh, been there. Most of my boyfriends were homeless when I met them.

Then I had to pause and actually think about the fact that someone had suggested I go fuck a homeless man. Over fucking anyone who was in the club that night. That’s how bad the crowd looked, people. One point for homeless men, zero for faded hipsters in capes. Seriously. One guy was wearing a rainbow towel as a cape.

Joe wandered back into our discussion.

JOE: OK, is this done? Anything else? Do you have a serious question?

AOTA: How do you feel about the Village Voice describing your music as ‘crunk punk’?

JOE: Crunk Punk? I don’t even know what that is. That’s not a hard hitting, serious question. Those guys are corporate shills. They have no idea what they’re talking about. They’re a bunch of Oberlin College, left wing, homosexual, shit eating—

CHRISTY: I just realized I have drink tickets!

Christy began pulling wads of red tickets out of his pockets.

JOE: Man, I paid for this beer! Give me those.

CHRISTY: Do I get a serious question?

AOTA: OK, what do you think will help the situation in Darfur.

JOE: You ask me about crunk punk and he gets Darfur?

AOTA: Feel free to answer if you have an opinion, Joe.

CHRISTY: I don’t think out government gives a shit about Darfur, so nothing will happen.

JOE: C’mon give me a serious question.

Joe rolled his eyes at me hard.

JOE: And he gets the Darfur question.

AOTA: Ok, ok. A serious question for you. How can America get out of this recession?

The guys scrambled away from the couch and out of the green room as if the bell had rung on the last day of school. Luke paused at the door.

Oh yes. I wouldn’t miss the main event. Not for all the towel caped hipsters in Hollywood.

As Cheeseburger took the stage I looked around, noticing that the mass had thinned out considerably. I ambled over to the bar but before I could even order a gingerale, the bartender barked at me that there was no more free Colt. That explains the personal space around me in the club. Most of the little crack whores were on to their next hyphy crunk party to be seen and scened.

But don’t worry. Cheeseburger didn’t arrive with a pocket full of cock rock for nothing. As if transformed by some combination of electric guitar and malt liquor, these creatures from the valley appeared, dressed as if it were still 1988. Not the ironic fashions mind you. These were the authentic Sunset Strip customers that kept people like Vince Neil decked out in rhinestones for years.

As Joe postured and growled his way through the set, these creatures became bolder, rushing the stage and trying to grab the mic from Joe’s sweaty paws. One woman, old enough to have given birth to almost everyone there, kept gyrating on top of the monitor and throwing herself at the mic stand repeatedly. No amount of security could restrain her, and soon the beefy dudes just gave up. 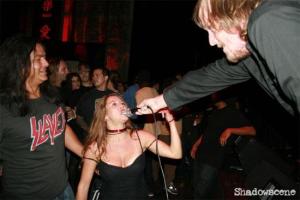 Now, I do love cheeseburger, but I have yet to see any AARP aged women throw themselves at them as if they were at a Bon Jovi concert. Was it the Colt? Or the crushing guitars and pounding drums?

I’d like to think it was the latter. Hopefully the next party Cheeseberger plays will be Colt free. I’d hate for everyone to think they were having fun just because they were really fucked up. In fact, I challenge Cheeseburger to play an aclohol free joint for their next gig. I guarantee everyone will have just as much fun. Cheeseburger is sonic crack – a raging party in every song. And just maybe you’ll get some purple jellybeans.