Often when making their way from humble beginnings to the arena setting, a band will play some odd gigs. State fairs, weddings, bar mitzvahs, cemetery hipster shows and if they chance upon it, the corporate gig. Some may balk at it and call it selling out, but a band that plans on not living on some girl’s couch  a band planning on owning their own equipment – and publishing, knows that getting paid to play instead of the other way around, is the business of show.

So this is why I found myself heading down to ‘the HB, yo’ to see the lads in Street Drum Corps, where they were performing a set at the US Open Of Surfing. Having played the Bamboozle tour, The Alt Brothers and Frank Zummo are no strangers to drumming in the hot sun, but this was right on the beach, right on the water, in close proximity to surf, sand and sunscreen. How would all the leather and studs and war paints hold up in these conditions?

Huntington Beach is only an hour away, but we may as well have needed a passport. Every cliche for SoCal life was immediately present. Barefoot girls in trucker hats? Tattoos of Tilly’s on their ass? Check. Dudes in Ed Hardy? Check. Guy with no shirt wearing a python as a scarf? Check! Los Angeles is supposedly the Babylon that the religious right is so worried about, but if you take a peek behind the Orange curtain, I think there’s a lot more to be sweating right in their own back yard. 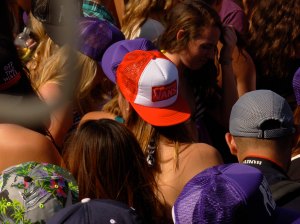 As we approached the incredible maze like phalanx set up for the Open, throngs of half naked co-eds with day glo body paint milled about walking from booth to booth looking at displays set up by Nike, G Shock, Skull Candy, Converse and other sponsors. Each PA system at each booth bumped their sound louder, raffling off prizes and announced stupid human trick contests until it was a muddy mix of loud noise where one could only make out a few “yo, dawg” s and “aiiight bra!”s mixed in.

Before heading to the stage to catch the boys play, we decided to take in a bit of surfing competition. I walked down to the beach and looked towards the pier, scanning the horizon. Nope, no surfing going on as far as the eye could see. Strange that. Perhaps a bit later. What was still going on, was a LOT of shilling by Hurley, and other companies with their latest products with the latest technologies to stay drier, be louder, go faster, get drunker. Mixed with booze and free bands, the corporations had the kids as a captive audience. You really have to hand it to them. Genius.

Next to the BMX pit, a stage surrounded by trucker hat wearing teens and twenty somethings, Street Drum Corps took the stage with a rousing rendition of their single ‘Knock Me Out’.

Bobby Alt, sporting a new Billy Idol look, got the crowd singing along, though I’m pretty sure not many of them knew the song, which is definitely a coup.

What followed next is one of the strangest things I’ve ever seen…Hurley’s ‘Walk The Walk’ is a high school fashion design competition described as  as “Friday Night Football” meets “The Runway”.  After three months of online video challenges, six high schools from across the nation  compete with a runway show with their own Hurley collection in front of Hurley executives and ‘celebrity’ judges like actors from 90210, Lauren Conrad (from The Hills) and Camila Alves (Mrs. McConaughey).    .

What it was really like was a cheerleading/drill team competition from Bring It On, meets MTV’s Pimp My Ride, meets Glee on Crystal Meth. Don’t get me wrong, the designs these kids came up with were great. Some of the routines and dance ideas would make Broadway choreographer throw in the towel. But the onslaught of sparkle and spandex and commerce was very Californication. 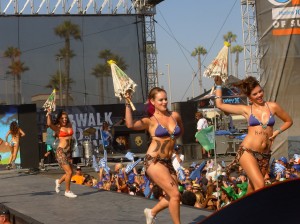 And of course it was set up as a competition, for a $25,000 prize that Hurley was donating to the school. Which is awesome of Hurley. Because Hurley is giving a lot of money to help kids who have promising design careers ahead of them. However if you think about the money Hurley is saving…

Companies spend millions of dollars on market research on the teen market. They do a lot of research on what young people want to buy. Especially what young people want to wear. Wouldn’t it be genius to hold a competition around the country and get that market to show you, nay MAKE you exactly what they want to wear? Call it a contest. Throw them .001% of what you would have spent to figure it out. You are local heroes in the community…everybody wins. Surfs up, dude.

Sorry, the cynic is back to the previous blog in progress…

Some had multi cultural messages, others stuck with the theme, Born In the USA. But the level of professionalism, both in the clothing and in the performance was tops.

Even the hostess, Anna Lynn McCord of 90210 seemed embarrassed to follow some of these teens with her lame stilted patter.

As the judges conferred on who would take the prize, another band took the stage, Cobra Starship. I know of the band, because I know they were formed after one song written for a movie was a hit. ‘Snakes On A Plane’. You see where I’m going with this? As they launched into their first song, the only thing I could verbally mouth was “How did this happen?” Seriously. With all the talented bands working their asses off all over this great nation, How. Did. This. Happen? I can be patient and graceful, but I’ve found that my patience wears thin when record companies insult me. It reminds me of that Quincy Jones quote: “When you chase music for money, God walks out of the room.” Well some of this music really points towards atheism.

We quickly made our exit, the Street Drum Corps lads drums long silenced, their corporate job done. As we scanned the beaches and the horizons again, not one single surfer was out on the water. Perhaps the surfers who had been paid to surf were done and they had all gone home too.

At least Street Drum Corps really shined and got paid to do what they do well.

That’s one small triumph for the creative spirit, in the face of the corporate Goliath.