While having dinner with Ian last night, the topic of dj culture came up. The electro, hose, nu-rave scene has burst like a serato pinata here in LA, and in NYC as well. Now, I’m always a champion for new music and creative outlets…but it seems to me there is a glut in the market. It’s like that Jack Black joke in the Tenacious D pilot, about aspiring musicians… (paraphrasing) “if you suck, and we ask you to stop, you must stop!” Lately I can’t walk into a bar without screaming FOR THE LOVE OF KRISHNA, PUT THE I POD DOWN!

It seems that with the nightly dance parties in heavy supply, anyone, and I do mean anyone, with a laptop and i tunes is now a DJ. So where does that leave the DJs who have been doing it for years? What does it mean to be a DJ? Is it style? Are you a DJ if you can scratch? Is it substance? Does being a DJ constitute having a good selection and crate digging your heart out? Or can you get by if you get the crowd to dance by playing Thriller and Justice off your Nano? And is it any great feat to get a bunch of kids cracked out on Sparks to sway and slam to a beat? Ugh. 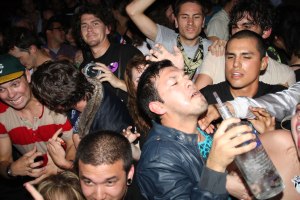 Does a good music producer make for the best DJ? Or is it shiny stickers spelling out your name on the back of your laptop? I’m an on air radio DJ and I spin at some of the local clubs, in between bands. I spin mostly rock and punk, so I don’t get asked to be on the hipster club bills. Does this make me less of a DJ? OK, don’t answer that last question.

Ian mentioned that some of these club promoters/indie label owners/hipsters in American Apparel DJs, have their own booking agent. And big time bookers too. What makes someone pay thousands of dollars to have a specific DJ flown in for a party? Is it name recognition? Does a lot of website party photo ops constitute recognition? Or do you need to be seen walking the red carpet with the Good Charlotte boys? And why do some of these hipster dj duos think that they’re famous?

One unnamed duo, who have recently gotten a bit of local hype, claim that their fame is wearing on them. Heavy is the head that wears the black leather fedora. Woe is the electro boy in a Members Only jacket. Too much fame! How do they get up everyday and lace their free Puma kicks? Now I’m sure you couldn’t pick them out of a line up. Nor are they gracing the covers of any magazines. In fact, if you took them out of the insular LA/NYC scene, no one would know who they are. But they behave that their lazy re-mixes are an art form so great that they should be given the VIP treatment wherever they go. I smile as I wonder how long these ‘famous’ guys would last in a spin off versus someone like Pete Rock.

Which begs the question: Is DJing an art form? What does it take to make something art? By playing someone else’s music, are you then too a musician? How much do you have to change a piece of music to make it your own? How many seconds of a sample can you use in order to patchwork together a song? Is cutting together a track of samples any less artful than editing sound of instruments being played in a studio?

In my moonlighting as a clothing designer for Rock-N-Role, I take vintage cast offs, de-construct them and make them into something new. I consider that designing, but I’m sure the people at Parsons would consider it cheating or whatnot. One of my favorite artists, Banksy, often takes pre-existing works and adds his own cheeky flair. Is that not real art?

If you’re a DJ with your own album out, ala Junkie XL, or Cut Chemist, does that set you apart from the popular kids who speed up a Justice track and call it a new mix? Where does the line get drawn? I believe that the great Steinski is an artist the way he blends together bits and pieces of old movie quotes, Zapruder film audio and beats…but he can’t legally sell The Lessons. So sales and charting can’t be the only measure of a man (or woman).

Someone like Shadow, who can keep a crowd going and has a flair for ‘spinning plates’, certainly earns the respect and worship of many…but is his art form cheapened by an up and comer serato spinner in a hyphy crunk hoodie and neon wayfarers? Or is there room for both? 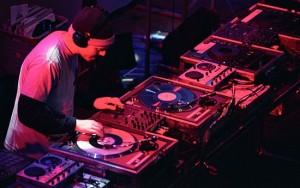 A lot of the old school dj/turntablists that I’ve interviewed are very careful not to slam serato. “It means I don’t have to carry 80 pounds worth of records on the airplane with me.” said one. But they do say that you can’t polish a turd; meaning if you kill on the decks with 45s, then you’ll be great with serato. If you don’t know what you’re doing, you will still suck. Technology can sink or swim you.

I personally give more respect to the record collectors, or ‘vinyl trekkies’ as Kid Koala calls them. Spending hours and hours at odd hours, digging through dusty crates connotes a certain commitment to the craft, as well as an obvious love for music and sense of musical history. But is any of that important when faced with 200 electro/emo hispters who ‘just wanna dance’? What do you play to those kids…what you like or what they want to hear? And whatever happened to street cred?

…but it seems to me that a lot of these new DJs are in it for fashion…or perhaps because it pays better than working at Urban Outfitters and the hours and drugs are the perks they’re looking for. How many of the new DJS consider what they’re doing an actual craft or career, and how many are just in it to be pimped by Scion or Nylon. If we could send a camera crew to each of their homes, would we find them listening to music in their off hours? I mean really listening to music. Pushing their boundaries and searching for the next sample that will blow our minds.

Speaking of blowing minds, I couldn’t discuss the tables without including this from Kid Koala…he plays a record like it were a violin. And he spins without headphones! If this is an art form, Koala is masterful:

31 thoughts on “DJs and Turntablism – are hipsters and laptops killing the art form?”