As another great installment of the CINEMA TUESDAYS, Flux and Nike Sportswear at the Montalban Theater held an exclusive VIP benefit screening of filmmaker Terry Gilliam’s The Imaginarium of Doctor Parnassus. The event served as a benefit for the Australians in Film Heath Ledger Scholarship in honor of the late actor. 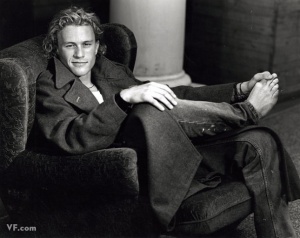 As people gathered in frigid LA temperatures and huddled around complimentary boxes of Aussie fave Tim Tam cookies and warm espressos, the Australians In Film committee announced that it was donating the evening’s proceeds to the scholarship. A panel of judges will be determining who will be awarded the scholarship, including one of the film’s stars and Ledger’s friend, Jude Law. The movie hadn’t even begun and handkerchiefs were dabbing at swollen eyes.

I was excited to see a film by one of our most daring and dazzling filmmakers and from a man who has had every possible production nightmare beset him. Lets not forget, his opus film The Man Who Killed Don Quixote was plagued by so many problems – including a natural disaster- that the movie was shut down.  It eventually became the topic for the documentary Lost In LaMancha – a truly chilling film that keeps even the most adept filmmaker awake many sleepless nights. So for Gilliam to pull this film off in the face of such a tragedy is already a true tribute to Ledger and to grit, determination and the creative spirit.

The movie follows an immortal man, Dr. Parnassus, who travels in an old dilapidated circus wagon, trying to entertain the people of contemporary London with his vaudevillian stories. His hidden agenda is to also save a few souls along the way, in order to repay a bet he lost with the devil. Dr. Parnassus is saddled with his immortality – a storyteller and showman who has become obsolete, as no one wants to hear his stories anymore. His antiquated Punch And Judy styled stage cannot compete with London’s bright lights and dazzling technology. Dr. Gilliam err, I mean Parnassus, knows this and feels lost in a world where he will never grow old but will never be new.

Veteran stage actor, Christopher Plummer is great as the fallen monk, Parnassus, bending to all the mortal pressures of drink and wagers. Plummer is joined by his traveling gypsy companions: model Lily Cole, adequate as his fiery red head daughter and stunning in the gypsy meets fleet street costumes. Verne Troyer is cast as the Doctor’s voice of reason – never thought I’d type that sentence. Andrew Garfield almost steals scenes from the veteran matinee idols he is pitted agaisnt as the barker, Anton. Tom Waits chews up the scenery as the devil in Joel-Grey-Cabaret clothing, Mr. Nick. And there is quite a lot of scenery to chew in a Gilliam film.

But the elephant in the room is the role of Tony. Heath Ledger’s last role in The Imaginarium Of Dr. Parnassus is infamously incomplete. That he had three of the world’s leading actors fill in to bring his role to fruition is a testament to what a great actor he was and what a great hole he has left behind.

In fact, though the film is chock full of fantasty, whimsy, scenery and ideas (oh you could trip over the grand ideas), the film seems lonely when Ledger isn’t on screen. Ledger’s first appearance in the film as Tony Liar, is hanging from his neck from a London bridge, an auspicious start to a movie that was almost never finished. It is a shocking fist glimpse of the actor and one that takes your breath away.

Ledger’s Tony Liar character, based partially on Tony Blair and all his duplicity, is a millionaire who raises money for a children’s charity and is ultimately exposed as a fraud. Interesting that Ledger chose this role, as he was always felt fraudulent in the Hollywood spotlight. Eschewing the superstar role, Heath preferred to disappear in a role and simply be an actor. Even if he was greater at it than he ever gave himself credit for.

The Imaginarium in question is a sideshow mirror, which when paying customers pass (or are pushed through it) are transported into a fantasy world which reveals their deepest desires. For a small child it is a giant set of a Candy Land video game. For a rich matron, it is a gondoliered trip down a Nile filled with giant Blahniks and Faberge eggs. Of course there is a battle for the person’s soul at the end of this journey. Dr. Parnassus and Mr. Nick both wrestle for the person to choose the right path. Tony often accompanies these souls and attempts to guide them correctly, sort of as a sexy river Styx escort. As it is each individual’s fantasy and imagination, Tony appears different to each of them. This is how Gilliam was able to solve his leading man crisis.

After Ledger’s death, three box office heart-throbs stepped up and stepped in for Ledger, filming the fantasy sequences in Gilliam’s re-imagined imaginarium scenes. For one woman, her Tony lothario was a lusty Johnny Depp. For another, it was Jude Law climbing the ladder of success, and for Lily Cole’s Valentina, her rascally Tony was Colin Farrell in rare bad boy form.

It is a testament to both Gilliam’s film making and Heath’s reputation to bring all of these people together to create one immense Tony Liar. Unfortunately neither Depp, Law, nor Farrell, while all three of them fun to watch and immensely charming, have the depth that Ledger had. 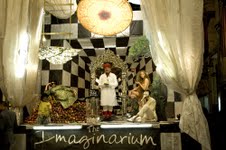 This Gilliam film is a grand and bright acid trip in the truest sense – there are strands of Munchausen, Time Bandits, and my favorite Terry film, The Fisher King, but there are also nods to classics like Bergman’s The Seventh Seal, King Lear, and of course the great Faustian bargain. Each player in this pantomime has one. Money or love? Life or death? Good or evil? The very same things that plague us daily as we go through our lives, Gilliam plays out for us on this traveling stage that his characters cart around modern London.

It begs the question:

How many of us cart around these questions with us everyday, and how many wrestle with it until it kills us?

It’s hard not to become overly philosophical while watching Heath’s character wrestle for his life when the world knows that he lost that battle a year ago. I was strangely hit hard by the death of Heath Ledger – someone I didn’t know at all.

I don’t normally emote on the passing of a celebrity –  someone I’ve never met, but as the credits rolled on this film, I found myself moved to tears. Maybe, as a filmmaker, I was just so relieved that the film got finished. Perhaps as a performer they were tears of frustration and loss of/for Ledger.

I suppose I felt a connection to someone who was such a strong life force, who attacked his work with conviction and passion. I also can identify with wrestling with insomnia and the seeping black moods that accompany the creative process. The fact that Heath achieved great success in his career is something to admire. But the fact that he pushed himself beyond that and strove to be a better actor, a better artist than what was really required of him – that is where my heart goes out to him. It guts me that this process was part of what led to his demise.

That this film is about a man who has sold his soul for eternal life is eerily prescient. Heath Ledger’s star will live on forever. I, for one, would rather have him among us, living in obscurity. 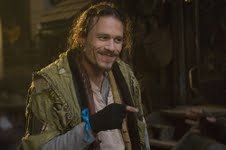 If you’d like to donate to the Heath Ledger foundation, please visit: http://www.australiansinfilm.org

The Imaginarium of Doctor Parnassus opens in major cities on December 25th.