A KCRW affair is always a classy one. This year’s Halloween Masquerade did not disappoint. From the gorgeous setting at the legendary Park Plaza to the central casting styled beautiful people in costumes fit for a movie shoot, there was everything needed for a visual and aural bacchanal. 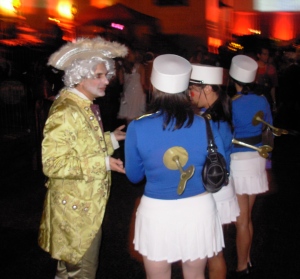 The grand staircase of the Park Plaza was jammed with incredible ensembles ranging from clever to kitschy. There were the topical and predictable, like a Galifianakis in blu blockers with baby from The Hangover, to costumes so intricate they had moving parts which lit up.

There were hats and gloves, masks, tails and plumes, which scraped floors and door frames. The amount of glitter, feathers and fur left in clumps on the floor of the women’s bathroom made the place look like a kennel in Vegas.

Each level in the historic Neo-Gothic hall had a full bar, spooky projected visuals and grand gothic décor. Out in the back, the premier foodie trucks, Sprinkles Cupcakes, Koji Korean barbeque, Border Grill and Kool Haus served up treats to hungry ghouls.

Gothenberg’s electropoppers Little Dragon dressed in all black like Dieter dancers with brightly colored Aztec paper masks, played their synthy tunes for an enthusiastic crowd in the Bronze room. As Yukimi writhed and waved her oblong tambourine and atoned ala Siouxie over the poppy goth beat, the well dressed crowd didn’t waver for a moment.  She rewarded the audience by dancing harder and singing to the back of the house with Evita arms outstretched. There was a massive response for these Swedes. Angelinos want more Little Dragon and they want it immediately.

Upstairs, the crowd for Sea Wolf was just as great, even though Little Dragon’s set overlapped theirs – the only unfortunate problem during the evening – Alex Church and company took the stage decked out a la Day Of The Dead in black skeleton jumpsuits and white skull faces. True, I was a bit disappointed he wasn’t dressed as Teen Wolf (luckily KCRW DJ Eric Lawrence WAS dressed as the MJ Fox character) but that’s where my disappointment ended. Alex sang the new songs with a confidence I haven’t yet seen from him, which will serve him well once the New Moon hoopla snowballs into insanity.

Downstairs, DJ Shadow took the decks with 45s, of course, spinning funk and old school favorites. In my eyes, Shadow was the ‘get’ of the night and the clear headliner. He is one of the premiere DJs of his time.

Unfortunately, his crowd was a bit thin, due to the set times overlapping and the fact that he was up against the Jonestown-like fervor of Edward Sharpe and an electronic rave that Jason Bentley was commandeering on the top floor. I’ve never seen men in full Amadeus regalia and powdered wigs dance in a room that was hot enough for a Bikrams yoga class. It was like Bentley had them in a Trance trance and none of them could pull their overly made up bodies away.

Many people filed in the ballroom to watch the final band of the evening, Edward Sharpe and the Magnetic Zeros, perform. Alex Ebert and his polyphonic spree type cult of musicians crowded onto the stage and launched into pleasant singalong sounds. It’s funny to think of Ebert this way. I remember him with the bi-level razored hair and skinny Ima Robot jeans when his songs ‘Scream’ and ‘Dirty Life’ made me do a lil’ indie dance. That was before he made a pilgrimage to Pioneertown and started dressing in all white, all the time. Now, everyone is entitled to a sea change both musically and looks wise. I just wish I liked the new music as much as everyone else around me did. Even the guy dressed as a Golden Shower, danced like a Manson family member on a Joshua Tree LSD binge.

I went back downstairs for more DJ Shadow and for some Garth Trinidad who brought the obvious missing element: Michael Jackson’s Thriller. Decked out as Moses, he used his great, ahem, staff, to part the wheat from the chaff and really make the zombies dance. On the floor. In the round.

Thriller night, indeed. Something for everyone and each one of the senses provoked, the masked masses danced straight into the early hours of All Saints Day.