Space Oddities – Looking For Rock In All The Weird Places

In this town, it’s easy to get jaded. Every club or party these days seems to need to top some pinnacle of bacchanale… a regular night with drinks and music just wont do. A warehouse rave is just ordinary. It has to be louder, harder, faster: rollerskating parties, dodgeball parties, plastic surgery parties, parties where you’re in a video game, parties where you come as your spirit animal, parties in a subway car, parties in the basement of the Ramada, Edward Scissorshands parties, staring contest parties…the weirder the better.

And now rock shows are going by way of parties. It’s not enough to just stage something in any old raw space or polo field. First Fridays sets up songs next to stuffed Woolly Mammoths and dinosaur bones. Tom Morello raged against deus ex machinas in a Venice Church. DJ Squeak E Clean has dropped it like it’s hot at a Hollywood car wash while fashionista DJs The Misshapes have spun for the well heeled in an airplane hangar, complete with planes standing by.

It’s time to step it up to the realm of absolutely bizarre. Rock show in a cemetery? Check.

Glasvegas are known in Hollywood more for their cataclysmic buzz and for disappointing a sweaty Coachella crowd by their last minute cancellation. Tough it’d be odd to see these Scots in a searingly hot desert rather than in pissing rain. Perhaps that’s why their playing at the Hollywood Forever Cemetery just fit. But a show at a cemetery? It has to be some sort of sacrilege or at the very least a nuisance to those who haven’t quite crossed over. And seeing how out of control Angelinos can get when their basketball team wins. Do we really want to start a riot on a hell mouth just so some indie kids can rock out in a new, exciting way? 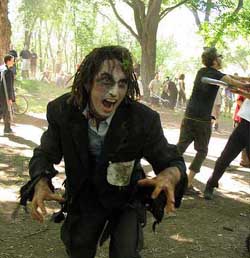 Traipsing over graves to get to the gig, I was already feeling guilty for looking for fun in a place of death. Maybe I’m not so goth or emo after all. I’ve been interested in seeing Glasvegas since NME editor Conor McNicholas recommended them to me last year, but with all the huge hype surrounding them, I was expecting to be disappointed.

The staid, upwardly mobile hipster crowd, waited patiently as the Glasvegas wake was delayed by nearly an hour. Finally, fresh off a stunt/gig at another strange venue (Las Vegas wedding chapel), James and Rab Allen took the stage in the Masonic Lodge, by walking down the crowded Hall and waiting for a crew dude to pull back a curtain hung on a wire. This crude set up revealed a gothic, yet etheral stage complete with an old wurli, a grand piano, white roses and a giant angel ice sculpture with a red broken heart. A perfect marriage for the Glasgow boys’ moody and soaring songs. Though some people in the crowd wondered aloud whether or not the rest of the band would join them, James and Rab kept it acoustic-ish and intimate, only pausing to bring up pianist Paul Cantelon for a rendition of “Stabbed”.

James, channeling both Strummer and Costello in dark Ray Ban sunglasses, repeatedly asked for the lights onstage to be brightened as he tried to make out the keys of his Wurlitzer in only the glow of a film strip showing old movie stars and a rain of glitter. I suppose the shades didn’t help this, but when faced with entertaining food for worms, I guess I might do the same. Tunes like “Geraldine” and “Daddy’s Gone” sounded better than the rocking originals – the whole show had a Leonard Cohen vibe to it. A man across the aisle from me complained that it wasn’t a full band, I wanted to yell at him “It’s called NUANCE! Adjust, motherfucker!”. Where I was expecting to be disappointed, I was actually swayed and haunted. It was fitting to hear these Scottish dirges on a gray, misty graveyard evening. Though the moisture did give one pause – my friend next to me remarked that she was nervous that the giant ice sculpture was melting onto the instruments and amps and might cause the Allans to be electrocuted. They could be killed. “Well, they’re in the right place, if it does happen.” I replied. Sometimes location can be the x factor of the evening.

When I was invited to see a special acoustic performance with Bat For Lashes, I jumped at the chance. The Glasvegans had whet my appetite for some UK atmosphere and I couldn’t wait to see Miss Natasha in a dark and smoky club or out of doors under an old street lamp where the mist and fog could swirl around her layered synth songs.

Wait, she’s playing where? At a jeans store. On the Santa Monica 3rd Street Promenade. In the middle of the day. For a Neighborhood Social. Really?

As the kick off for the first Lucky Brand Neighborhood Social, Lucky lined up live silk screening by Giant Artists, denim painting by William Lemon III and provided fair food snacks for the people who stopped in. The inner sanctum of the store was reserved for a wrist banded crowd, to be treated to DJ sets by KCRW’s Jason Bentley, plus a Bat For Lashes set before their big show at the El Rey.

Natasha Khan and her supremely talented keyboardist, Ben Christophers, took the makeshift stage which was wedged in the back of the store. People lined up and sat on jeans bins waiting for the elfin Khan to utter a sound. Khan, dressed in a gauzey pink blouse and sequined headband was instantly copied as girls in the crowd slid strings and scarves across their bangs. Ben, looking very Gold Rush/The Sting era in a long john shirt, vest and braces seemed perfect to play turn of the century xylophones, harpsichords and zithers that he whirled around like a mad scientist in a music shop. (note: see interview below for more on Natasha’s gear!)

You could hear a pin drop in between Natasha’s lilting songs, which the singer commented on, nervously. “You can talk in between songs. Be rude. It’s ok.” But the small crowd was silent and with rapt attention as if beholding the glory of a living unicorn.

And that she is, or more closely resembling Kira from the Dark Crystal playing the keys. Her voice lilted daintily and then crecendoed into a powerful yelp, taking after her predecessor, Bjork. Natasha ended the quick half hour set with a lo-fi version of Daniel and then floated away backstage, er I mean, into the stock room.

A stock room seems hardly the place to hide away such a talent. But then again spaces and places are the name of the game today. Perhaps the thrill of the nu show is to find an oddity to jack up interest in the artist. frankly neither of these acts needed that extra push. They could’ve played in a brick walled condo in Barstow and still held as much interest.Oh dammit. I’ve just given promoters a new bad idea. Please, guys. No Barstow condo shows…

more about “Space Oddities – Looking For Rock In …“, posted with vodpod