Forget candy hearts and wilted flowers. The way to really get to the heart of another is through the power of music.

If you really want to get laid, or hell even hitched this Hallmark holiday, there are two albums on the scene which will not only help you accomplish this task, but might even help you fall in love…with music all over again.

Findlay Brown, a young Yorkshire crooner calls himself a musical obsessive. After being struck by a car and laid up with a broken leg, Brown studied music so intently, downloading track after track of Phil Spector and Carole King Brill Building era songs and studying his favorite genre, became steeped in 60s sound before he wrote a single note on his new album, Love Will Find You.

Produced by Bernard Butler (Suede), Love Will Find You has the haunting, lilting vocals of a bygone Orbison tune and the songwriting craftsmanship of Lennon/McCartney or The Righteous Brothers. Brown claims that he was ‘unashamed’ to be sentimental when creating the album. In his favorite era, the 60’s, there was a romanticism that was present. People connected with the music and with each other.

True, in this digital age, with people often standing behind a laptop onstage, there is a greater disconnect between performer and audience member. Robot music is sometimes entertaining but no one would ever call it heartwarming or…sexy. Findlay Brown’s live show was both those things. The set was dynamic and well crafted, and it made me wistful for a time when we all looked each other in the eye and held meaningful conversations instead of texting each other.

If you want to make your sweetheart swoon, pick up a copy of Findlay Brown’s Love Will Find You.

No one is a stranger to the slow jam power of sexy Sade…But now she is back and she is NOT playing around. She recently dropped her new album, Soldier of Love, which in turn dropped jaws owned by the most jaded hipsters and seasoned music vets I know. 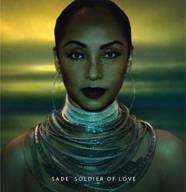 There’s something about Sade that makes the ‘too cool for school’ just want to get up and get down. Hell, she can make a song about GETTING LAID OFF sound sexy. When was the last time talking about being out of work for two years made you want to get up and dance and get sexed?

With so many useless wars and fighting going on, thank god we have the queen Smooth Operator Sade, as our soldier of love.

Here’s the Soldier Of Love video: