Los Angeles was grooving to the beat of many different drummers Saturday. The Guitar Center Drum Off Championships brought out hundreds of young hopefuls, six finalists and a slew of celebrity judges.

The Henry Fonda was filled with all ages eager to hit the skins, including some barely old enough to read… 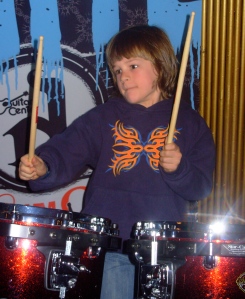 Luckily there were free drum kits set up all over the lobby for anyone wishing to take their metered aggression out in a musical manner.

I played drums briefly when I was twelve. Somehow, I was put behind the kit in music class and then graduated to stage band as a chick drummer. Of course, that lasted only a few weeks until my natural inclination to be a front woman emerged and I became the singer. But I always loved playing drums. I begged my parents for a kit and lessons, but was denied due to the fact that our piano sat collecting dust in the corner of the living room.

So I found myself both a bit envious and also amazed at the young kids at the event whose parents wholly encouraged them to make a lot of noise. Celebrity judge and guest performer, Thomas Pridgen, was a winner of this very competition when he was only nine years old. So the bar had been set.

TC and I stood on the roof contemplating the mass amount of men in sorts in the brisk January air. We wondered why out loud, was it a fashion faux pas that had never been corrected? Phil Jauguiri, Evans Drum A&R stepped in to remind us that shorts are chosen for ventilation. Ah. I guess Tommy Lee never bothered with ventilation – leather shorts wouldn’t have worked for the ladies.

I felt it was my duty to get in that mix and ask a pertinent drumming question…what is the best drummer joke you’ve ever heard? Chad gave this gem:

“Q. What’s the differene between a drummer and a pizza?

A. A pizza can feed a family of four.”

Kenny Aronoff thought that there are no good drummer jokes:

“They all suck”, he exclaimed. But he did recall hearing one about drummers who drool.

SDC veteran and incorrigible flirt Bobby Alt had this joke with a similar theme:

“Q. What do you call a drummer without a girlfriend?

I chime in that I was once that girlfriend. Bobby admits he has most definitely been that boyfriend in the past and then suggests that perhaps we should join forces and shack up…because I need another wayward boarder? However,  as Bobby points out, it wouldn’t be for long because there’s always a tour looming. Hmm, perhaps this arrangement could work out.

Just to be sure, I ask him what his favorite song to air drum to and he crows that it’d be the epic ‘In The Air Tonight’ by Phil Collins. Hell, I’ve been known to pull over to the side of the road to air drum for that song.  Sounds like a match! I’m clearing out a drawer for you, Bobby.

The show kicked off with a performance by Jason Bittner an then a special dual performance by Thomas Pridgen on one side of the stage and Thomas Lang on the other. The cacophony of relay drumming was outstanding.

Emcee for the evening Stephen Perkins (Jane’s Addiction) kept things light and airy between the rather long set ups that stalled an already tense evening.

At long last, the finalists got to take the stage. Juan Carlos Mendoza (E. Brunsick, NJ), Jerome Flood II (Lawrenceville, GA), Anthony Burns (Saginaw, MI), Ramon Sampson (Memphis, TN), Sherman Arnold (Englewood CO) and local boy Timm Newton (La Mesa, CA) wowed the crowd with their  skills, some concentrating with laser like precision, and others hamming it up with stick tricks and taking a drink during a fill. 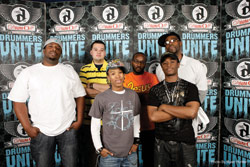 The talent on stage would make a decision near impossible. The consensus in the photographer pit was that Ramon had skills plus an undeniable charm. The judges deliberated during a performance by Papa Roah, and when they came to a decision,  the mastery of Jerome Flood II’s performance would bring him the champion title and $25,000 prize.

The 22 year old from Atlanta was overjoyed, if not a little bit overwhelmed by the new found fame and cameras snapping around him.

Jerome got his start at church –  his father sings in the church choir, and Jerome grew up watching the performances. His parents bought him a drum set at the age of 2 (ahem, Mom and Dad!) and he was well on his way. When I asked who he was influenced by, he deferred to name a specific artist or genre, saying that he emulated the church drummers he grew up watching. Though he did say he’s been listening to a lot of Yellow Jacket and Jazz.

If asked to put together a super group, Jerome’s face lights up – he would choose Usher’s guitarist and his cousin Curtis on bass and his friend Tracy on keys. Keeping it in the family…how cute is that?

And how will Jerome spend his next few days as Tinseltown’s newest Cinderella? Auditioning for a Christian rock band, an appearance on Carson Daly,  and finding a place to live – now an attainable goal since going from near penniless to $25,000 richer (Jerome doesn’t seem like the cliche freeloading drummer that starred in  Bobby’s joke).

Oh, and he might go shopping for some new clothes. A man after my own heart.