It’s a bit difficult for someone with a hearing problem, such as myself, to try and explain my love of prog rock to others. Especially when the math rock co-title gets bandied about. Several high school tutors and a SAT prep teacher can attest to the fact that I sucked at math. My brain doesn’t really think in linear terms. I’m bad with numbers, negligent with bookkeeping, and will take twice as long as any normal gimp to put together a piece of Ikea furniture. 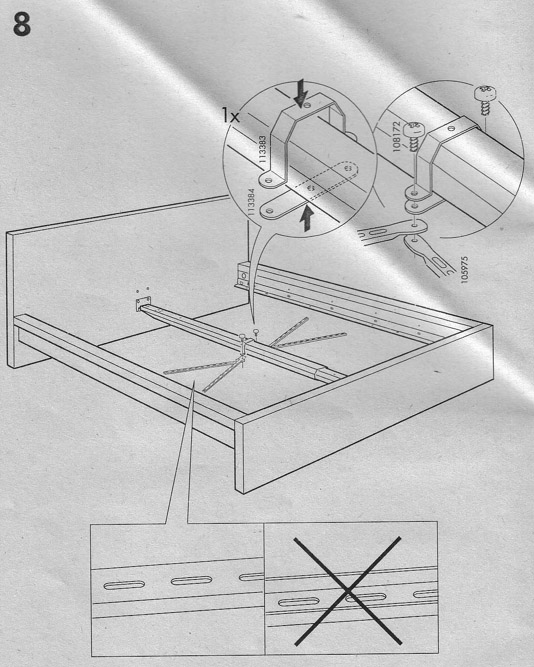 So perhaps that’s why the recent faces of current prog rock make me feel at home. Though a verse chorus verse song is easily digested, the meandering and epic songs of Radiohead, Muse and The Secret Machines transport me to a science fiction world where rules of mathematics need not apply.

Ok, yes, I realize there’s a lot of synthy math involved here. But to me the sound is more like freedom and space; an ethereal musical landscape rather than constrained strains of notes forced to fit in a 3 minute ditty with a hook.

I was an enormous fan of Secret Machine’s Now Here Is Nowhere album. It accompanied me on long road trips up the California coast line and seemed to quell any travel squabbles my boyfriend and I were having.  Their second effort, Ten Silver Drops, while not as beloved to us as their first album, was a psychedelic way to start our Sunday mornings. Tickets for their fantastic live shows, would hang on our fridge, urging us to keep it together until the concert, so we could rock and sway at the show together.

The brothers Curtis and drummer Josh Garza sort of held our relationship together, at least in my mind. I was even once invited by TSM to go to a party with them after a show. I demurely declined, thinking of my boyfriend sitting at home waiting for me…and all of the TSM songs he and I had listened to together. Even when tempting the party girl within, The Secret Machines had solidified the bond with The Boyfriend and me.

But then there was a gap in space rock continuum. The departure of guitarist Ben Curtis panicked Warner Brothers, TSM’s label, creating somewhat of a rift and a recording delay. It also left The Boyfriend and I trying to hold it together with records by Leon Russell, Bowie, and Gang Of Four. Not to mention fighting over Jethro Tull…I’m of the staunch opinion that my home is my haven, and that means it should be a Tull-free zone.

With the wars of the record label, the war in Iraq, and the Tull war on the home front going on, the future seemed bleak. When former fellow Tripping Daisy member Phil Karnats was inducted to support vocalist Brandon Curtis and drummer Josh Garza, TSM was up and running again.

The latest album, the eponymous The Secret Machines, just dropped on my birthday – a sort of cosmic gift for me. Knowing that TSM was released on their new indie imprint TSM Recordings through World’s Fair, made me proud of the lads for getting all mavericky on WBR’s ass. And hearing that the album was supposedly a lot more dark and moody only excited the gothic girl in me that much more. 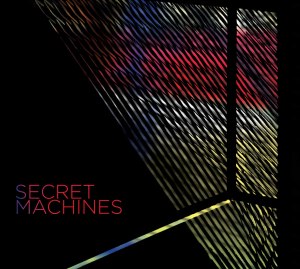 Upon arriving at the Key Club, we were handed a hot pink pair of 3D glasses. Was this going to turn into a weird Floyd laser show? Though I enjoy prog, I’m not the burn out, black light poster type. The set, designed by Kanye West’s set creator Es Devlin, was being quickly erected with twisted white ribbon tape, winding around the stage like an MC Escher painting. I was beginning to get concerned that there might be a geometry pop quiz after their set. 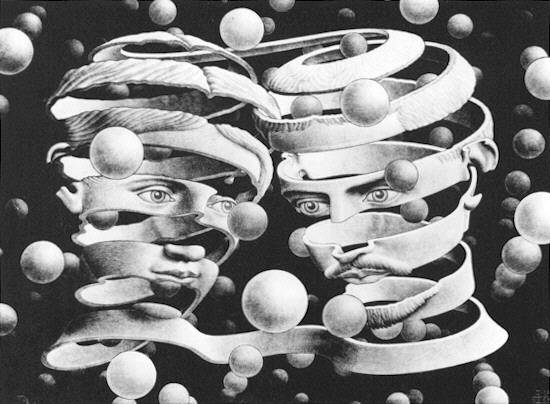 As the Machines took to the stage, they set up in their usual triangle formation, which allows the audience to focus on each part of the musical blend and gives the drummer a chance to come out from the back of the stage and be heard and seen by crowd. 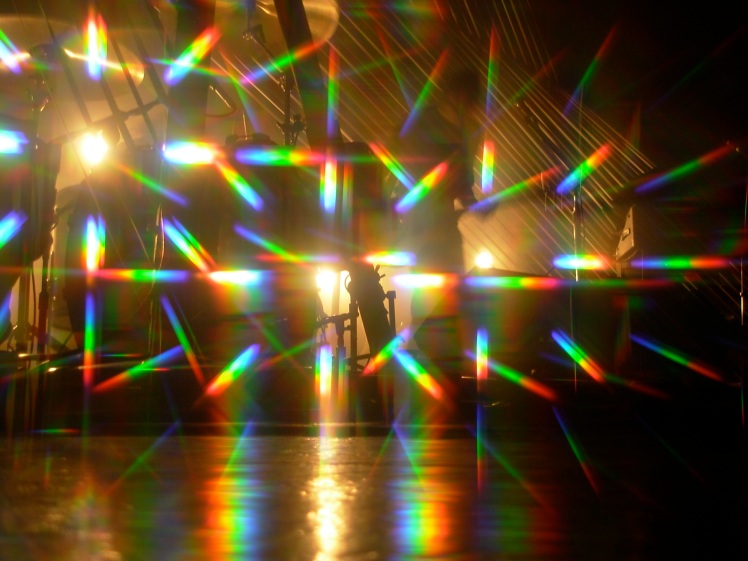 The lights dimmed to almost pitch dark and I popped my psychedelic shades on. A beam of light bounced off the tape, setting off a blaze of starburst streaks. Smokage was pumped out in mass quantities and gelled spotlights silhouetted the trio against the neon strips of ribbon. I was at a light show all right, but this time no drugs were needed. 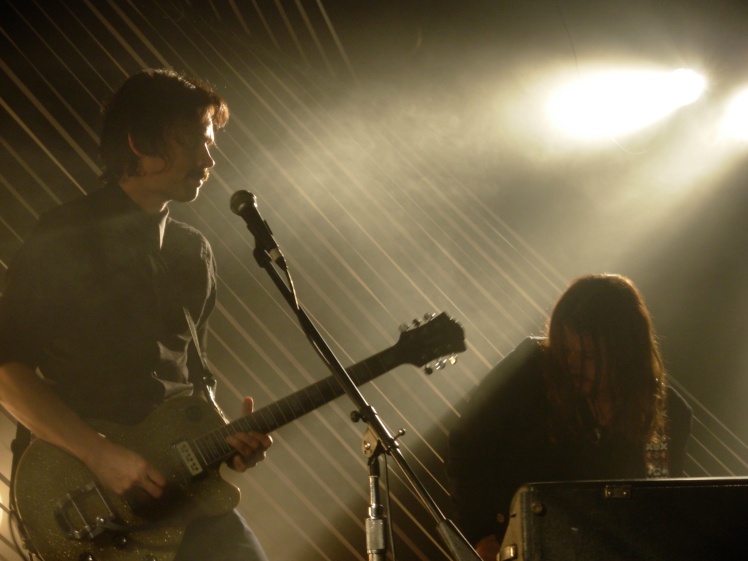 Karnats, standing statuesquely in the center, seemed more than up to the task to fill Ben’s shoes. He ripped through crunchy Zeppelin riffs that crescendoed into a mind blowingly loud implosion, perhaps rivaling the now infamous My Bloody Valentine reunion shows. 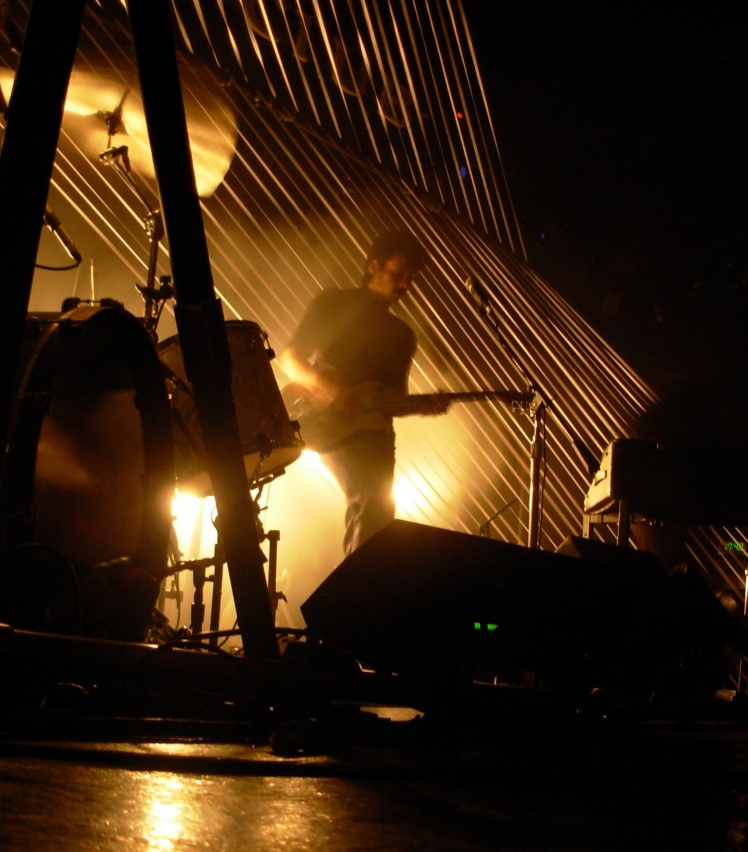 The fact is, there was very little about the new songs that fell into the ethereal category. No, this was more like the math rock version of Mastodon. It was so loud and crunchy that my friend and I risked admitting we were too old to rock, by moving from the floor -front and center- to seats in the upper balcony. We could still enjoy the multi colored lights with our 3D paraphernalia and our ear drums were less likely to burst.

I’m not saying I didn’t enjoy it. It’s just that The Secret Machines have changed. I guess that is the current climate of the country…no more 2004. We’ve all prog-ressed. The Boyfriend and his Tull records are long gone and nearly forgotten. The nation has come out of it’s reality TV induced coma to get involved with it’s government once again. And the luscious, hypnotic aural landscapes that TSM once painted, are now more of a Goya-esque sound, spiked with punky Gary Numan slivers and metallic Jackson Pollack riffs. 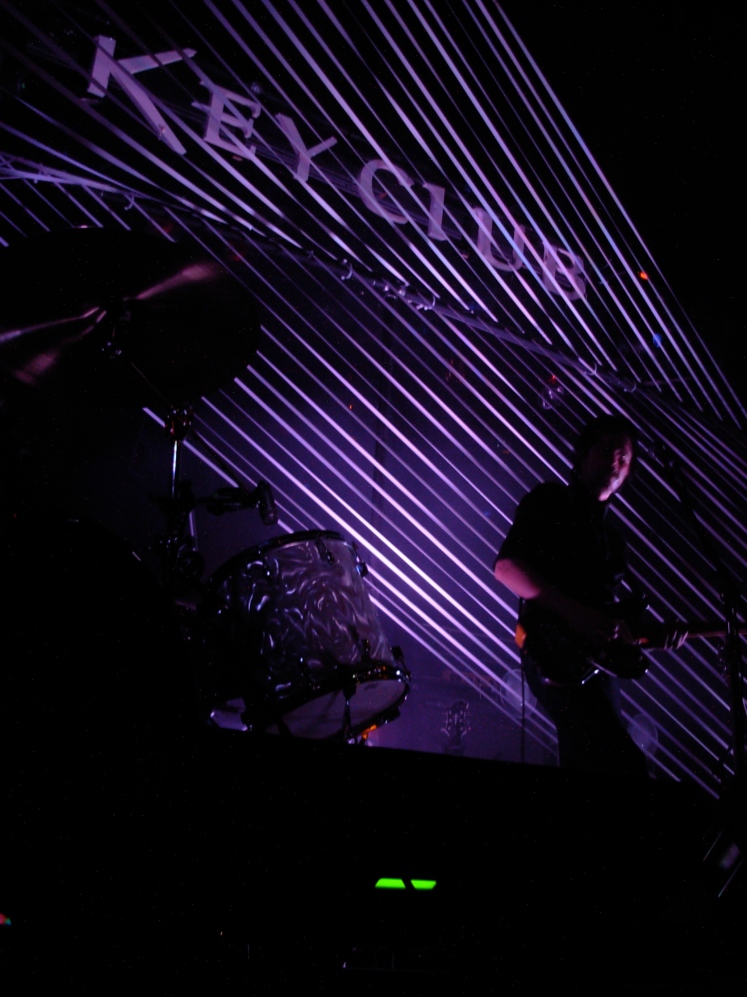 They say it gets darkest before the light…perhaps that means that the TSM future will be bright. Even with out those shades.