Rock journalism isn’t for the faint of heart. Though my suburban relatives may think that my professional life is a playground filled with hedonistic delights, they’re only partly right. There is a part of The Rock Life that is seedy, dark and filled with tragic stories of squandered brilliance and the leeching and blood letting by industry barnacles, which renders one so drained that there is practically nothing left (note: see upcoming Ali biography). While music may soothe the savage beast, when the music’s over, the beasts remain and feed, making it treacherous. Might I add that if you’re a woman, the trenches of rock are doubly so.

Often a gig is a place where one is defined…if only for an evening. There are separate lines at the venue doors. One for ticket holders, one for vip/guest list. Then once shuffled through security and frisked and swabbed (tonight the bouncer asked me to open my mouth and checked for gum contraband), you are given wristbands. A flimsy paper one if you have credentials to drink…a plastic snap-on bracelet if you are press, a brighter colored plastic bracelet if you are VIP and if you are the artist, or someone catering to the artist, well then sometimes the bracelet has sparkles on it. Artists like sparkly things.

I rarely attend shows anymore if I’m not on the list. Part of it is sheer jaded stubbornness, and the other is that it is my job to be there I don’t want to be treated like shit while I’m doing my job, especially by people who don’t pay me.

Tonight, my only night off in a long time, and I’m at a music show. I’m there to support friends, but even a simple duck-in, watch and say hi night, turns into greeting and hand shaking, listening, commiserating and general networking…if I want to actually escape work I have to go to a baseball game. Even hiking in the canyons has become over run with schmooze.

Whether or not I’m on the list, the baton pass of the wristband is still a stressful and irksome issue. No matter how thorough an artist or publicist might be, often names are left off lists, press passes are lost and egos are bruised…I’ve been told by box office hussies that my boyfriend hadn’t put me on the list. I know rock wives who have been told the same. Once, an event I was hired to film for, wouldn’t let me into the photographer/camera galley for the performance. Have clip board and badge, will conquer. And oh how the persons-in-charge-for-two-hours love to wield it.

Case in point: At the Troubadour last month, the over zealous and often pointlessly aggressive security guards, refused to let Brad Wilk in to the club, minutes before he was supposed to perform. He tried to explain that, yes, he was on the list, and that he had permission from the night’s star performer and organizer, Tom Morello, to enter. Even chants from fans waiting in line, went unheeded as Brad was rudely turned away.

“Dude, that’s the drummer from Rage! You can’t turn him away!” one amazed fan yelled out.

“I don’t fucking care who he is. He touched my velvet rope. No one touches the rope except me.” bellowed the guard, drunk with his low wage power.

Of course, minutes later, when Tom rushed out trying to find his band mate, the security guards could see their error. But amazingly, they wouldn’t budge from their position.

“We’re doing our job!” was their excuse. Yes, and with a veracity that will someday be used by Homeland Security.

Whether you’re in Rage Against the Machine or no…being listed and wrist banded, sticky passed or given the grail of the lanyard laminate, doesn’t stop one from being hassled. My friend Lorelei, who was performing at the Fonda tonight, was brusquely stopped at the backstage door, even though she had been going in and out of it all day long. 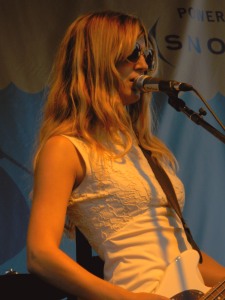 One reason why I am choosy about my free time rock is because of these overzealous cro-magnums. There’s no reason for excessive force on anyone simply walking by a door. Why all the hate? Is this a management mandate? If so, why all the precaution? And for that matter, is it necessary to charge six dollars for a bottle of water? Or to charge a photographer two thousand dollars to take pictures of the opening band? The Wiltern wanted to charge me SEVEN THOUSAND DOLLARS to film my interview with Cut Chemist…in his dressing room! For seven grand, I’ll rent a helicopter, fill it with Veuve Cliquot and interview my subject above the city, dropping the remaining cash on pedestrians below.

Why do they make it so hard for the artists, the press, the fans, to simply go and enjoy the show?

And unfortunately, this b.s isn’t only at the larger venues. I’ve had similar annoying experiences at the small so-called hip clubs like Spaceland and Silverlake Lounge…they abuse their customers and they don’t even have decent sound. No, I say. No thank you.

Another barrier my fun often faces, is what I call the ‘press conflict’. I consider myself a journalist and writer. However as the dual role of on air talent as well as actress, I always try to highlight the artist and bring out their best. I’m not one to try to trip someone up or paint them in a bad light. If that negativity seeps through in an interview, it’s not for my lack of trying to keep it engaging and fun. There are just some artists and industry who see the interviewer as “The Enemy” as Jason Lee’s character named the kid in Almost Famous.

So while my job is to often get all access for the interview, or even if the artist is a dear friend that wants me side stage to watch, there always seems to be a gate keeper huffing essence of ego, who distrusts me because I am a) a journalist and/or b) a woman.

I don’t even want to get involved in the ‘groupie’ discussion, which is a label far worse than “The Enemy” – a slam that most of my female friends have to dodge, even if they are accomplished photographers, publicists or even bassists. A female backstage is often seen as both eye candy and a target for abuse, no matter how professional she may be.

Imagine the limitations my fellow music biz girlfriends have to face: Can you date a musician? Will anyone take you seriously if you do? Should you dress down and hide your assets so as not to make the wives uncomfortable or the married label dudes horny? If you are a female IN a band and you shred, should you not step into your light, literally or figuratively, for fear of upstaging one of your band mates? How many times have my girlfriends and I been condescended to and told we’re cute, or worse, accused of just trying to get laid, when we’re actually trying to do our job?

Okay, okay. it’s not always terrible to be recognized for your gender or beauty. An old boyfriend used to say “It’s when they STOP harassing you – that’s when you should be offended.” And that could be true, but it certainly does complicate the already shark infested waters that flow backstage.

After the show tonight, and after the after-party winded down, our wristbands turned into pumpkins…no one was Cinderella anymore – not even the headlining band. A guard harassed Jaz, the drummer of Swervedriver to drink his beer and get out. He stopped short of grabbing it out of Jaz’s hand, but not with out some menace laced threats. I was even less lucky. With no drink in my hand, I was given a withering stare that clearly undressed me and implied that I was currently superfluous, no matter how good I was at giving head. You see…whether there as a dear friend of a band member, a girlfriend or even a tv show host, I was persona non grata. That’s OK. the night wasn’t about me. My ego can handle the changing tide of wristband status…but to have spent over twenty bucks on bottled water and then insulted is far from cool. Then, while Film School and Swervedriver gathered their things, the club began to lock up and lock them out of their dressing rooms. How muchmoney did these bands make for the Fonda tonight? Is foreclosure styled
callousness really necessary.

So what next? After spending most of the night being dressed down by security, undressed by the eyes of biz big wigs and jostled to and fro, am I allowed to finally participate in fun? When offered to party on the bus, what do I say?

‘No thank you, I can’t fraternize with the subject’.

‘No, it might look bad if I enjoy myself or, gasp, allow a tatty compliment tossed my way to actually land.’

What does a girl wearing high heeled boots and a cloak of dignity say? Does she let her guard down and enjoy the company of music men? Or does she separate herself from the ‘Artist’ the way the wristbands and guard rails have been doing all night long? If integrity is a guideline, where does the moral compass read at this point in time? And should a smart, attractive woman, who is confident that she is good at her job, ever care what others will say?

The rock chick in me says ‘fuck em.’ After all, Joan Jett doesn’t give a damn about her bad reputation.

But the college graduate in me, who has worked her ass off and suffered too many concussions from bumping her head on the glass ceiling, keeps a certain distance. The Rock Life is a marathon, and I’m pacing myself to win it. 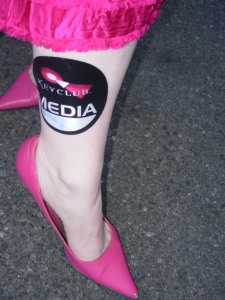